I feel like I maybe disappeared from the world for a while… stepped inside my little hermitage and shut everything out for just a while. It’s not so unlike me to do that from time to time. Longtime friends have learned not to be alarmed. The cause is usually intense concentration… on something. 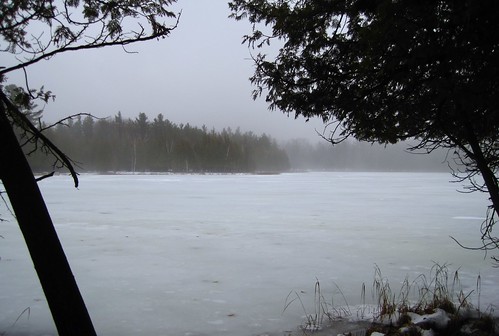 This time, the cause was the composition project I mentioned several weeks ago: my first-ever work for full orchestra. James can attest: I was consumed by work on it — nearly every day, and (on some days) ALL DAY.

A few years ago, I made preliminary sketches for a project that was to be called “Sanctuary”. I visited several of my favorite nature preserves in hopes of creating music to depict each one. The music was to be part of a larger project exploring how artists and composers approach the same subject through different modes of observation 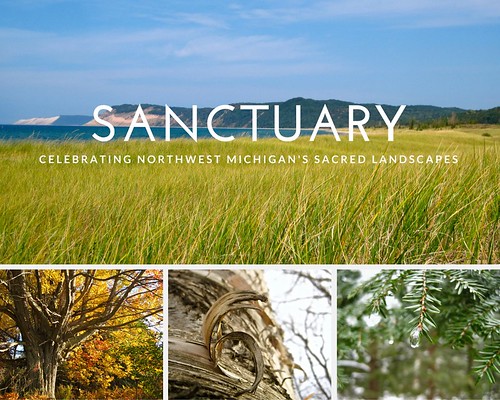 As part of the project, a painter would take the same hikes, creating artwork based on what had made an impression on them (landscape paintings, imaginary/abstract impressions, etc.). Meanwhile, I would create music depicting either a specific scene in the preserve, the contrast of seasons, or telling the story of an entire hike. We’d each journal about our impressions, how we approached the pieces we created, and then compile all of this artwork, music, and writing into an exhibit/performance/CD/book extravaganza.

The goal being to capture in words, photos, paintings, and music these very beautiful but complex places and the feelings they can inspire in all of us while also highlighting the differences between visual art and performance art and how they can sometimes combine to make an even deeper, more vivid expression of a single subject.

Well… needless to say, it allll fizzled out [trombone cue: womp-womp]. It turns out, it’s hard work finding a fellow artist who shares your vision for a singular project — someone on the same page as you, but magically working from a completely different vantage point — seeing through different eyes so that their perspective shines through but neither of your voices overshadows the other. Maybe someday an opportunity will present itself to take back up the full project.

But, in the meantime, while that pie in the sky bakes to a golden brown, I decided to take some of those abandoned musical sketches I’d made of the Platte Plains area of Sleeping Bear Dunes National Lakeshore and turn them into a piece for full orchestra. 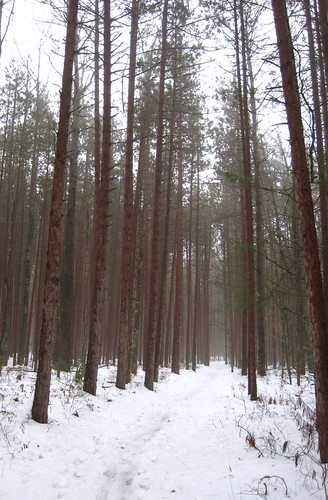 there (quite a bit!). Step two was revisiting the woods to see how they’re doing.

And so, James and I went one Saturday in mid-January, just before I started composing the piece. These are familiar woods to both of us — we hike Platte Plains at least once a year. Each time, we marvel at how different the scenery is depending on the season you visit!

Visiting in winter means making your way on snowshoes or hoofing through in crampons. Filled with both deciduous and evergreens, the woods are deep and lovely even in winter, but the colors are muted much like the soundscape. You don’t get to see the wild blueberries, the crazy mushrooms, or the almost neon greens of summertime.

These woods are also dotted with beautiful ephemeral ponds and bogs. So, in summer, that means you’re liable to be mobbed by mosquitoes. James 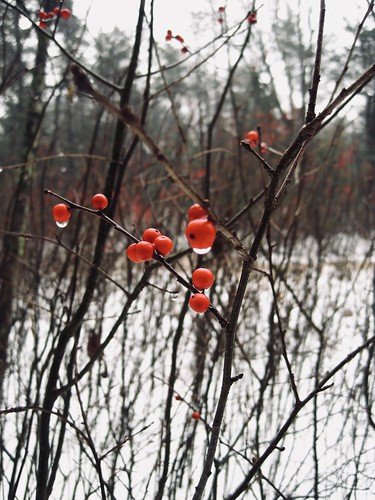 and I once “speed hiked” the trail (not our original intention), jogging the whole way to stay ahead of the blood-suckers (in spite of bug repellents and ample coverage). So, a winter visit is not without its pluses!

On our recent visit, though, I needed to reconnect with the voices of the woods that had initially inspired me. I needed the tiny, individual ideas I’d scribbled out to start forming a story before I could begin composing a large piece that would tie them all together. So, we put one foot in front of the other (hoofing it in crampons), and before long it all came back to me.

I’d charted our course to hit all our favorite spots, forgetting the trail is more taxing in winter (many miles with lots of hilly sections). By the time we made it to Lake Michigan (halfway through), I began to realize my hubris! There was no short cut back to the car, only the “shortest” way (which is barely shorter than the longest way!). 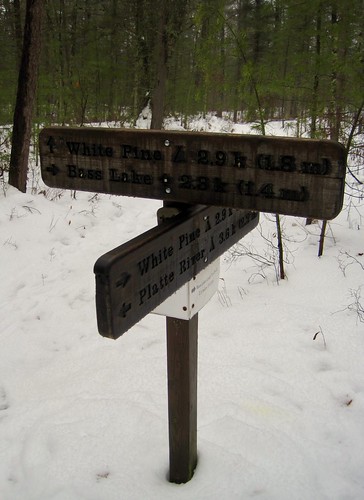 We made the best of it, though, neither of us complaining. Instead, we took out our little picnic of snacks. As we ate, we stared out over the lake, whispery and calm, shrouded in a silvery fog. The wind had whipped snow into dramatic drifts right up against the walls of the woods so that the snow on the sand had mostly been blown away. But on that day there was hardly any wind to speak of. We stood there remembering it in summer — the turquoise water, the green dune grass, the sage-colored thistles and knapweed, the white noise of gusts and surf. 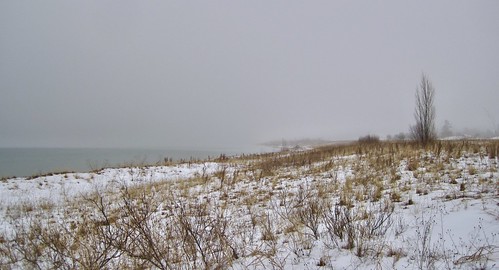 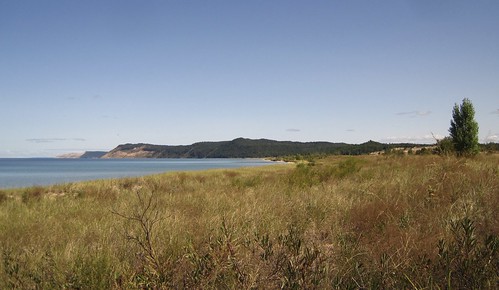 All throughout our hike, in moments when James and I were silent, admiring the scenery and taking in the meditative silence of the woods, I found myself hearing the melodies I’d sketched in my pad. There was one I pulled from the big ephemeral pond about the idigo-colored, wild iris. There was one that drifted down from the tall pine trees that soar above you and the hemlocks and maples who shelter you. There was one pounded in about the roller-coaster-like hills near the campground, and a caricature piece about feeling the burn in your hamstrings as you ascend the umpteenth hill. And, then, there was my favorite: the one about coming to the edge of the woods, seeing open sky for the first time since setting out, and having 180-degrees of Lake Michigan right in front of you like a giant gemstone. 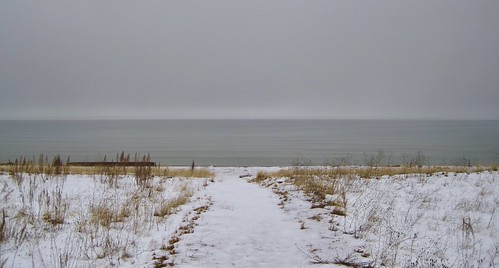 Now, after some interesting work exploring the colors of a full orchestra and countless hours sitting at the computer and piano, I’ve come up with an eleven-and-a-half minute musical depiction of a hike through Platte Plains. In my own mind, it also tells a story of coming to these woods to gain and lose something: gaining peace and inspiration, losing anxiety and your sense of constant hurry.

The creative part is essentially over for me now, leaving the more practical work of making sure the score and parts are as clear, legible, and accurate as possible. Driving me forward, though, is the giddy anticipation of actually getting to hear this performed on June 28. Eeeee!!

James was very understanding and supportive during my whole creative process — mainly coping with the fact that I didn’t want to do much other than eat, sleep, and compose for about a solid month! I would do my usual household chores, but my mind was obviously elsewhere! Having me bend his ear about my frustrations and triumphs during the process was a lot for him to bear, too. My moods were very unpredictable to say the least! It was also taxing on me because — when I’m composing — I tend to have trouble sleeping, or at least shutting off the music so I can sleep. In the past, I’ve spent many nights lying awake in bed, staring at the ceiling, waiting for my mind to shut up.

What really helped, this time, was my newfound hobby: knitting! I finally made my way over to Wool & Honey to get my beginner’s supplies and began work on a “sampler scarf”. It’s basically a scarf with no set pattern that more or less tells the story of how one doofus slowly learns to knit! 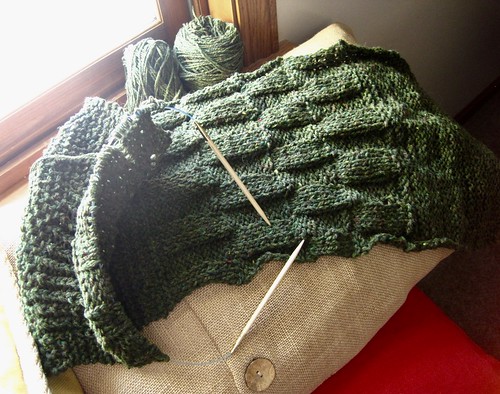 It’s also a sampler because I was able to explore different knitting patterns as I went along, switching it up as I got bored and wanted to try something new. 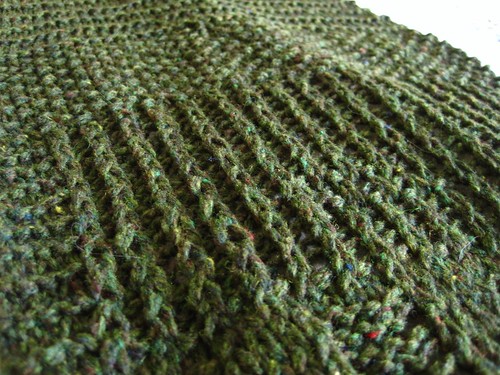 I really liked the yarn I selected — an almost forest green color with all these tiny flecks of gold, red, and even blue mixed in there.

I knit a little bit almost every night while composing Platte Plains… some nights knitting for an hour and a half before going to bed! The repetitive motion of making stitches, slowly completing row after row, managed to shush that 24/7 rehearsal orchestra in my brain! And, since one of my 2020 goals was to stop spending my free time in front of a screen (playing pointless games, zonking out on YouTube, etc.), it was a relief to have something constructive to do while waiting for my brain to shut itself off. 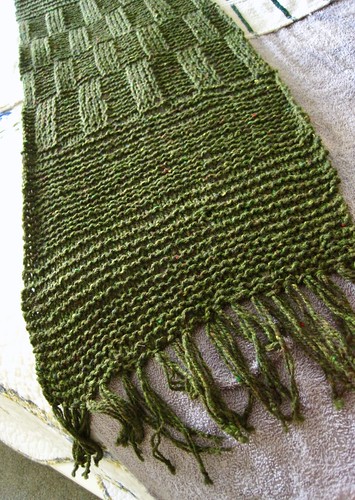 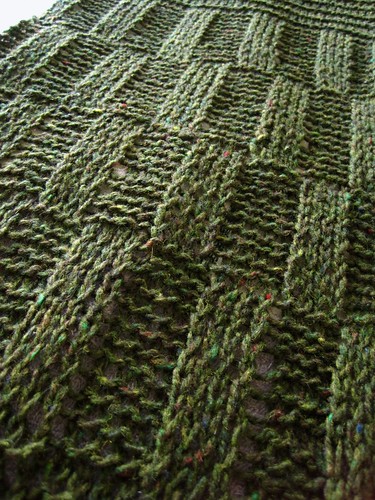 And now, of course, I’m completely hooked. The sampler scarf is still drying from being blocked. Meanwhile, I went back to W&H and bought three really cool colors in hopes of making a fashionable multi-colored scarf with two different stitch textures (limiting myself to TWO different patterns, this time!).

Anyway, that’s about it for me. I just wanted to check in, here, since I kinda jump-started this blog and then disappeared into my little imaginary hovel in the Skelligs for a while! I hope things are going well in your neck of the woods.

8 thoughts on “A Winter in Stitches & Rows”