Years from now when I look back on this Christmas season, what am I likely to remember?

Our dear friend, Nicole, passed away very suddenly on November 11th, just as the holidays were about to begin. Nicole was our neighbor for many years in Evanston, made countless road trips to Michigan with us to pick fruit, and came for several visits once we moved to Leelanau County. 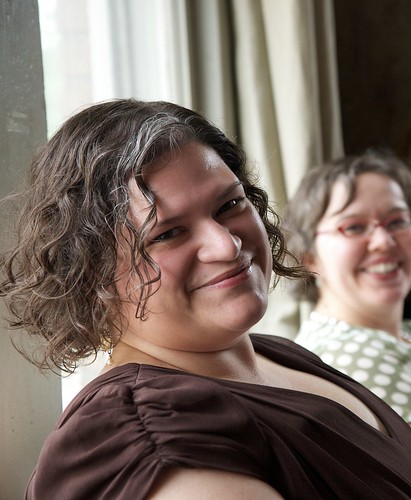 Her life was cut short at 41, and we’ll never know exactly how or why, not that any explanation would lessen our pain. If you’d like to know more about Nicole, you can read the eulogy I wrote which James read at her memorial service. I also wrote a dedication to her on a recent Manitou Winds Manitou-Zine post.

A week after Nicole’s passing, we also had to say goodbye to a beloved pet: our princess kitty, Tenderfoot.

Tender was the sweetest little thing — she loved everyone she met (except most dogs). She kinda adopted us the summer after we moved here. Our neighbors were kind enough to let us keep her! Though affectionate and lovable, she was a fierce hunter, the slayer of many mice, voles, chipmunks, rabbits, and pretty well anything within reach that looked tempting to her. 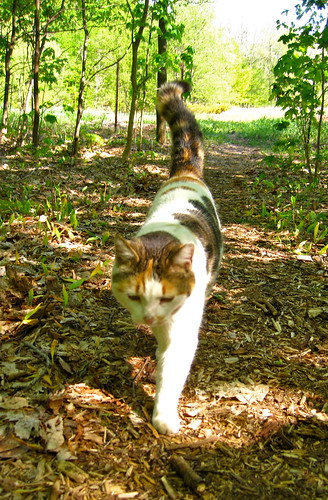 Anytime we were outdoors, she was always right behind us as reliable as a shadow. If we were busy working, she always kept a watchful eye from under her favorite tree or the nearest juniper. Then, in the winter, when she couldn’t get out much, she’d snuggle in her little heated bed in the garage or come rest by the fire in her kitty hotel.

She definitely had good days in 2019, but she was in her 18th or 19th year and seemingly living on borrowed time. After a few months of being weak but bouncing back, she eventually stopped eating and we had to make the decision to send her on.

Coming home from Nicole’s memorial service the weekend before Thanksgiving and driving into our newly empty garage was just unspeakably sad. Tender’s ashes arrived about a week later. We plan to spread them under her favorite tree (the wise and wild black cherry) in the spring.

I’ll remember being tired… pretty much every day until December 21st.

Once upon a time, our Christmas was only as busy as we made it. These days, Christmas Day is just an end cap to an already long procession of busyness that starts roughly in September and never. lets. up.

I think it’s why, more and more each year, James and I delay celebrating Christmas. We used to wait until December 1st to decorate and play the realllly Christmas-y music on the stereo. This year we didn’t play the first truly Christmas-y album until December 22nd, the same day we brought in the tree.

Christmas is meant to be about pure joy. But, joy doesn’t just manifest itself because the calendar says so. Some years it’s hard to bring that joy to the surface. Maybe it’s why James and I like to celebrate Christmas longer than we used to, so we can savor the joy rather than packing it away just a few days later.

I officially worked my last day of 2019 on December 20th. James caught a very strange bug, but still that weekend officially started the Christmas holidays for us both.

Instead of going to a Christmas tree farm and cutting down a beauty or going to one of the pop-up tree markets in one of the big-box parking lots, we decided to buy a living tree — a norway spruce! 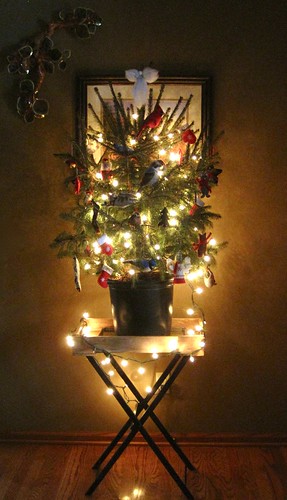 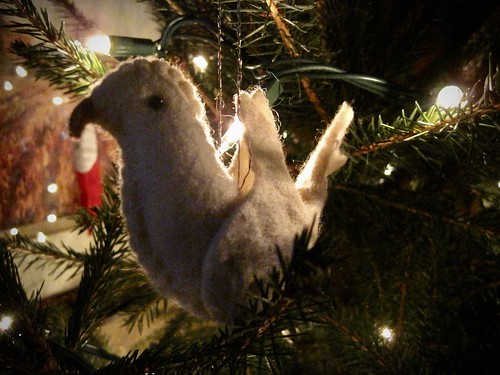 In many ways, it’s just the tree James and I needed this Christmas: small but ALIVE (not slowly dying while we decorate it)! One of the ways we’re planning to honor Nicole in 2020 is to start planting a small forested corridor on our property. This little Christmas tree will be the start of a small planting of evergreens within the little corridor which will eventually be filled by trees and shrubs of all sorts! 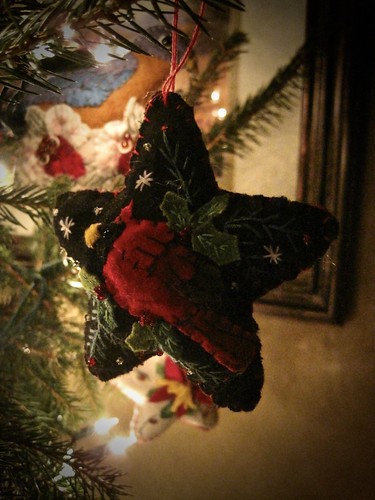 We put on our first Christmas albums of the season, strung our little tree with lights, and decorated it with felt ornaments. Since it needs to stay in its dormant state all winter long, we’ll only be able to keep it indoors for about a week before transitioning it back to the outdoors (keeping it indoors longer can “wake” it and make it start producing new growth which frost could damage). But, a week is just long enough, and those little twinkling lights make these longest nights of the year seem somehow a little shorter.

From our big boxes in the basement we chose just a few little pieces of Christmas kitsch to spread around the living room, dining room, and foyer. 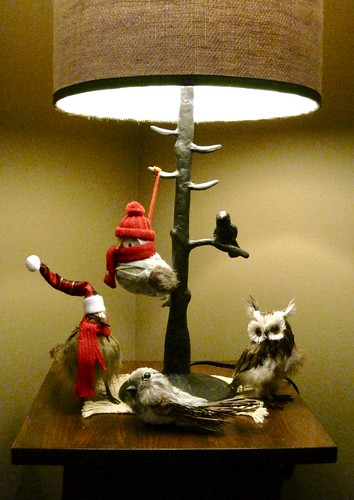 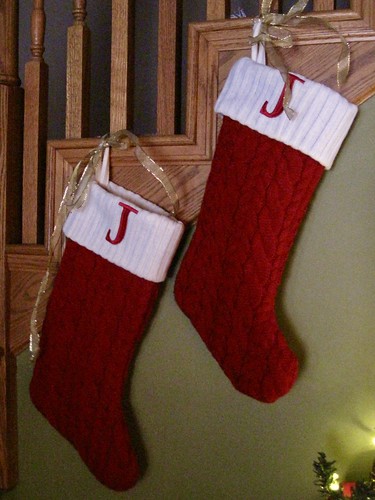 James and I decided to forgo our original plan to allow ourselves to eat meat on Christmas and opted for a fully vegetarian Christmas Lunch. Completely out of character, I put together a menu made entirely of brand new recipes! 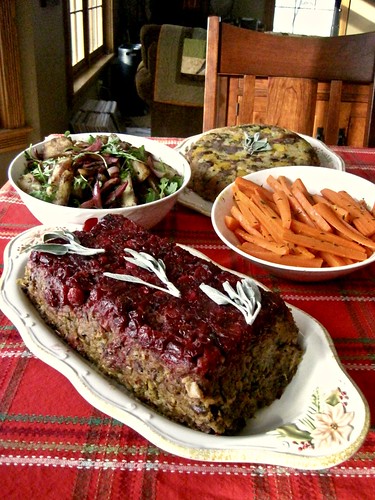 These were very tasty, but I’d stop just short of calling them “ultimate”. I guess “In the Top 5 Carrots” was already taken. They were an easy, colorful side to have on the plate for sure.

Though they were a tad more involved than mashed potatoes, these bold-tasting spuds were another colorful side that would be welcome almost any time of year. Served up in hearty wedges and tossed with peppery arugula, I like especially that they’re great served warmed or right from the fridge.

I’d been scouring cookbooks and the interwebs for a vegetarian stuffing — I even tried one in November — but I wasn’t satisfied. This recipe, however, really hit the spot. It’s chock full of harvest season flavors: butternut squash, sweet red onions, cranberries, and loads of sage. It’s festive enough for Thanksgiving or Christmas (or both!), in my opinion. Although the recipe lacks the customary 1-2 eggs, the finished texture was still very nice. Festively colorful and seasonally flavorful! I definitely didn’t miss the meat.

As best I can tell, “nut roasts” are largely a 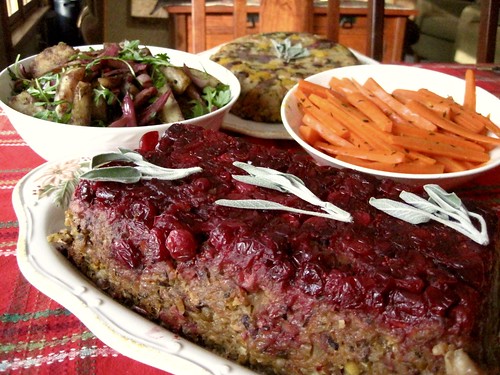 British vegetarian phenomenon. I’m pretty sure if an American had created this, it would have been named “I Can’t Believe It’s Not Meatloaf.” Despite the long ingredient list and the fact that its preparation put me through the paces, the end result was both beautiful and delicious. It has a deep, meaty flavor from multiple mushroom varieties, plus an exciting texture from the crunchy pistachios and almonds. It’s made even more festive by the lightly-sweetened cranberries on top which roast on bottom (like an upside-down cake!). Even more enjoyable than the first presentation was heating up leftover slices in a hot skillet and getting a little bit of searing on both sides!

And, of course, our tradition of the “Christmas Cake” was continued. Each year, James and I select a recipe that’s as over-the-top decadent and involved as we can stand. Then, we tackle the recipe serving up an extensive critique along with the slices. James found this year’s recipe in Southern Living’s archives. 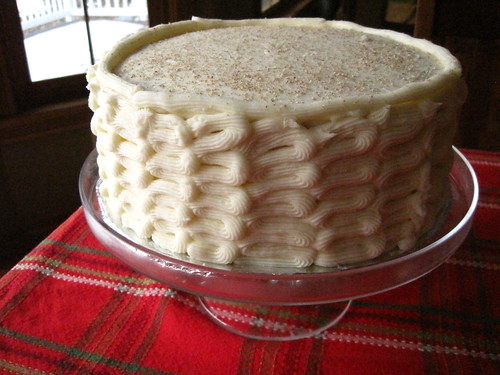 Out of 5 possible stars (5 stars being ultimate cake perfection), James and I agree this cake recipe was a solid 4. Beautiful presentation (I did my best to decorate it as instructed by the recipe)! The bourbon custard cream is delicious! The texture of the cake is moist but still nicely airy — especially served room temperature. The fresh nutmeg on top is refreshing and adds a needed egg nog lilt to the whole thing.

We felt this recipe fell short in a few key areas: 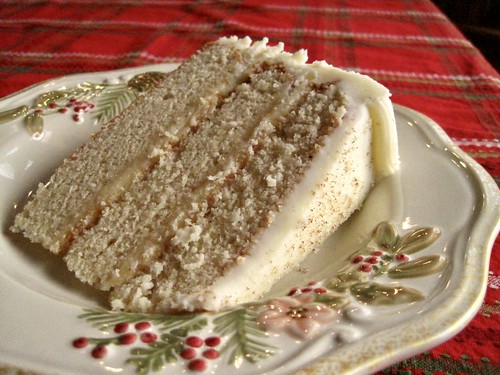 In sum, a truly 5-star cake overwhelms the senses and makes you forget all about calories and guilt. In my opinion, only 5-star cakes are truly worthy of hefty calorie counts! A serving of this cake (1/16th), weighs in at 741 calories (the bulk from the confectioner’s sugar [3,529 calories]!). We really enjoyed this year’s recipe, but were never unaware how many calories we were shoveling in with each forkful. All nit-picking aside, it was a celebratory, decadent treat (one we may someday re-tweak and improve). We enjoyed several slices ourselves and found some folks willing to help us devour the remainder (another fun part of the tradition!).

Of course, our “Christmas Cake” isn’t the only Christmas cake we partake of each season. I also love preparing and sharing the traditional Cáca Nollag (Irish Christmas Cake). But, since the cake stand is occupied on December 25th and for several days afterward, we don’t actually break out the Irish cake until closer to New Year — when practically everyone needs a nip of whiskey whether they realize it or not.

On Christmas Day, after breakfast but before coffee, James and I exchanged gifts. For the first time ever, we’d set ourselves with a firm spending limit: a reminder that gift-giving is about love and remembrance more than it is about generosity (i.e., over-spending). And, you 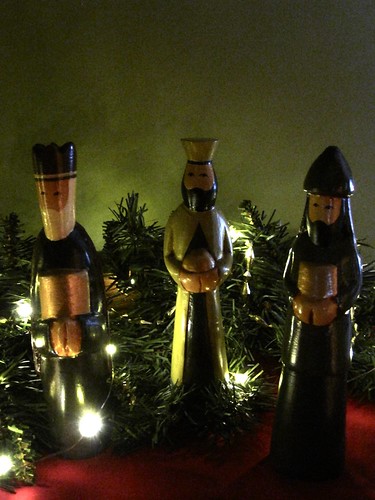 know what? The obvious fact that we hadn’t broken the bank for one another didn’t put a damper on the gift-giving at all. If anything, it made them somehow more meaningful.

Of all the gifts he gave me, I think the one that touched me most was a gift card to Wool & Honey. Wool & Honey is a really cool yarn and knitting store located in the town just next door to us. Nicole stopped in there at least twice each time she visited us. She enjoyed knitting (with only the best quality yarns and coolest colors), but she especially enjoyed talking with Melissa, the owner. Another way I plan to honor Nicole in 2020 is by learning to knit. That’s one of the reasons the gift was so touching, but James also told me he spoke to Melissa when he stopped in to get the gift certificate and she actually remembered Nicole — even though it’d been at least five years since Nicole had been by. She even kinda knew who we were because Nicole had told her so much about us. Melissa remembering Nicole made a little spark of bittersweet joy… to think that someone else knew our friend.

Among the gifts I gave to James, I think the one I was most excited about was the travel guide for Nova Scotia. We’re planning to finally make a trip there in 2020 — as a grand vacation, but also to celebrate our 15th anniversary. I was also proud of myself for finding a CD James would not only like but that he didn’t already own (no small feat).

And now, after Christmas as 2019 slowly draws to a close, I’m relishing the quiet that comes from a calendar with nothing on it. I’m grateful for everything that came my way in the old year — even the things that seemed insurmountable at the time. But I think I’m even more excited for the blank slate of 2020, the chance to keep building and learning.

In the meantime, while we’re waiting for 2020 to get here (and earnestly hoping for snow and actual winter weather to return), we’re enjoying quiet evenings with good books, cheesy sitcoms, sinful candies from our Christmas stockings, and visions of the New Year slowly taking shape.

I hope your holidays were as nice as ours. Whether you’re near or far, you’re close to our hearts. May the New Year bring you peace.